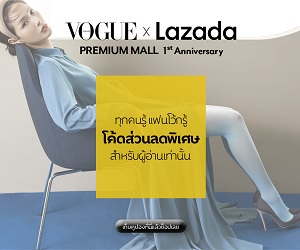 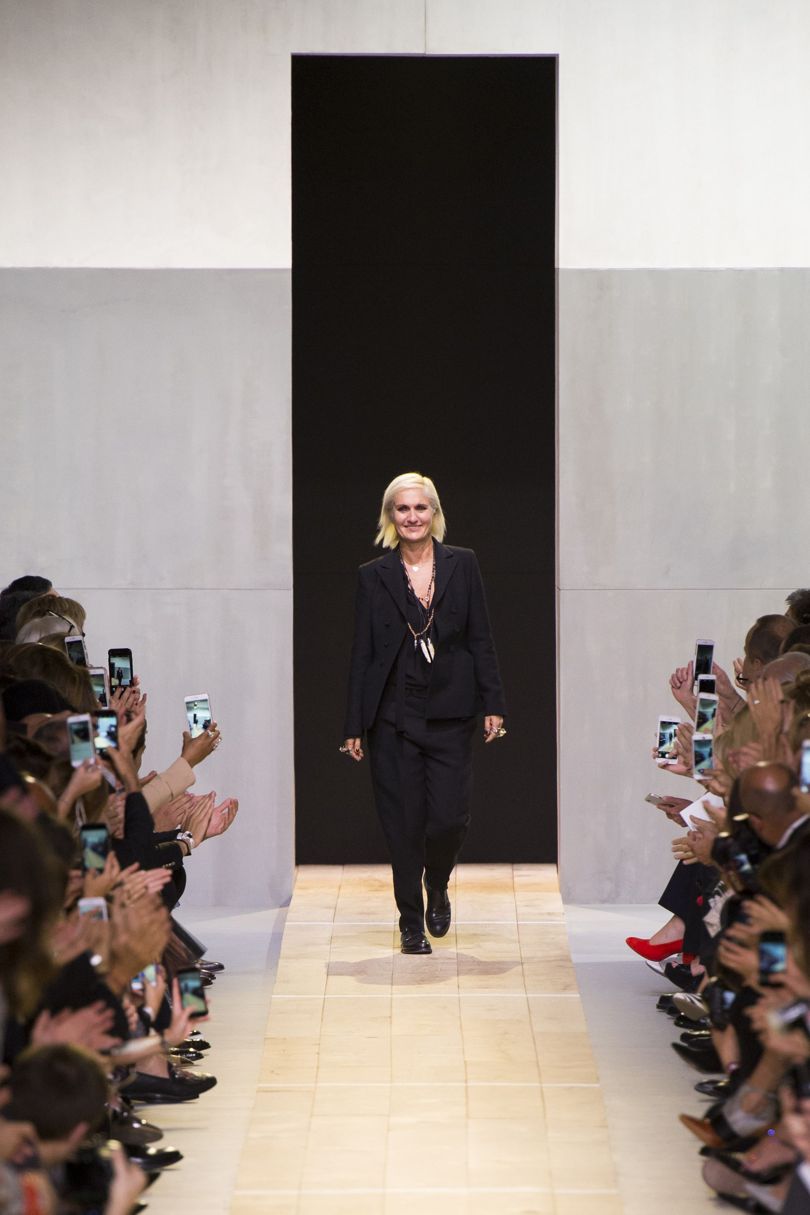 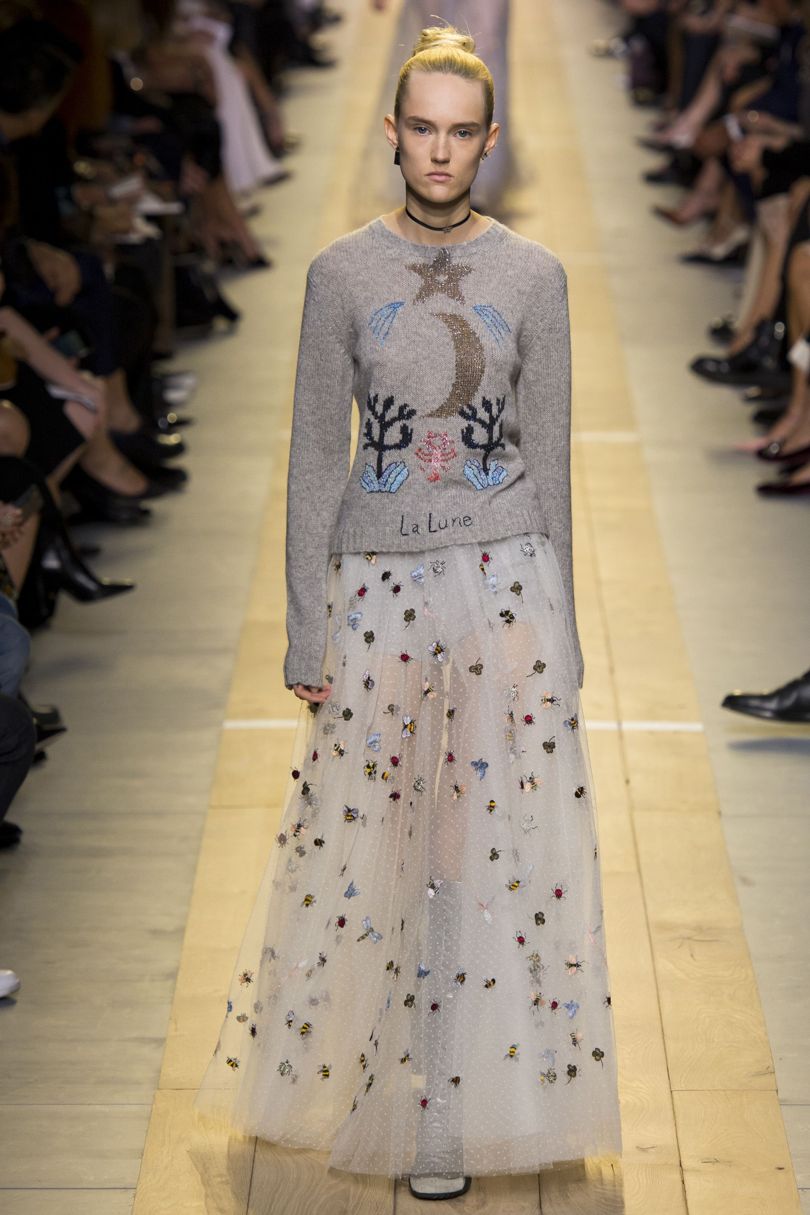 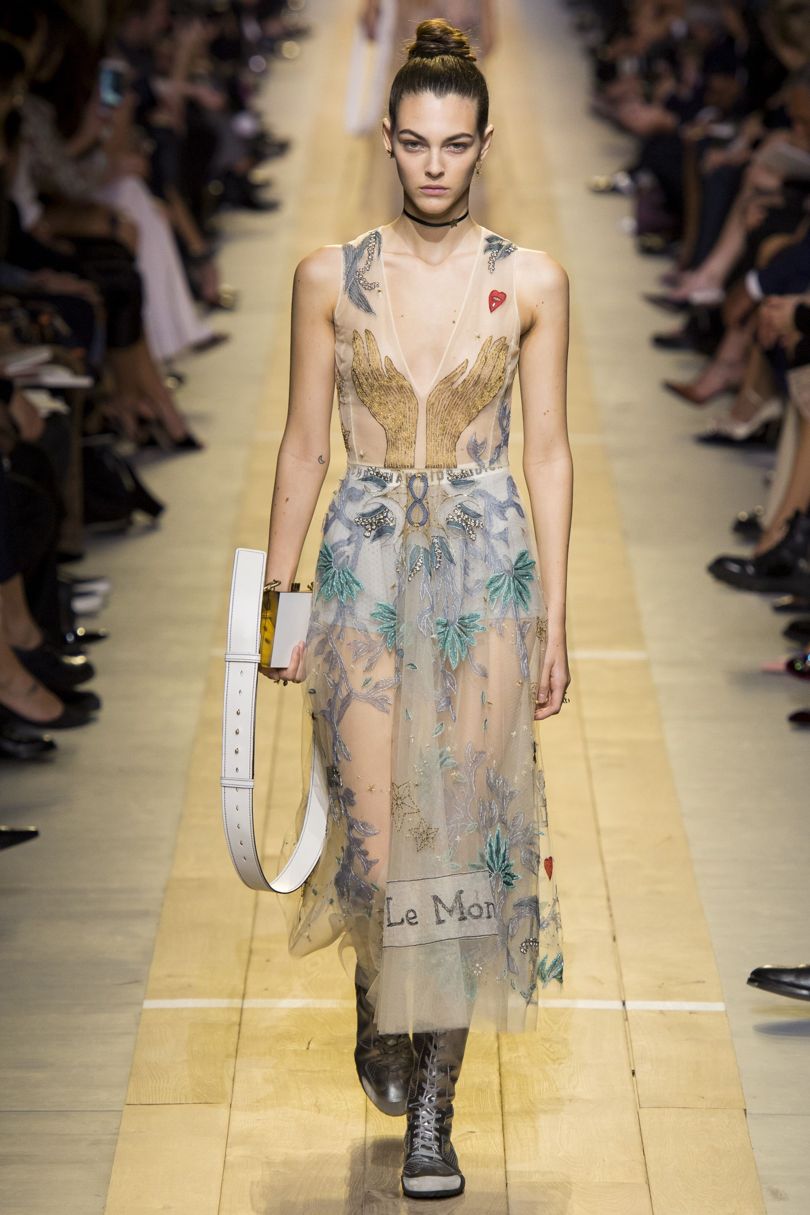 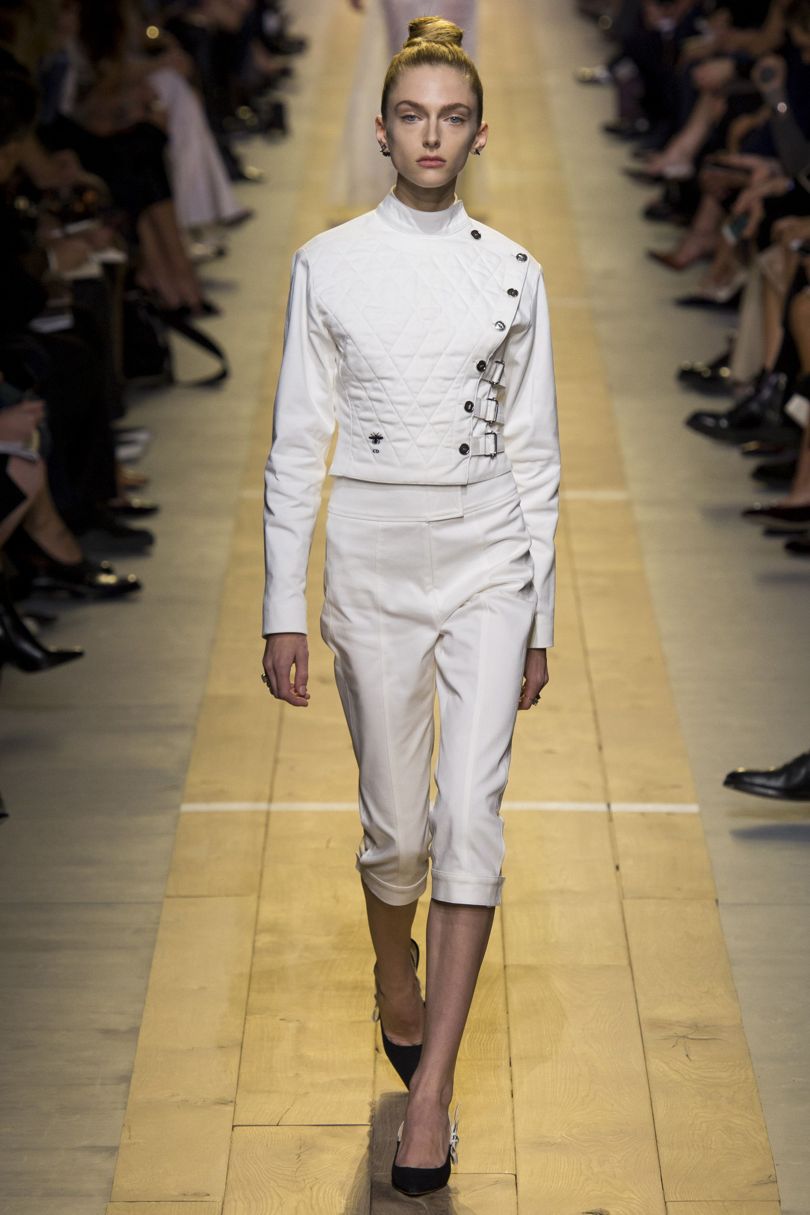 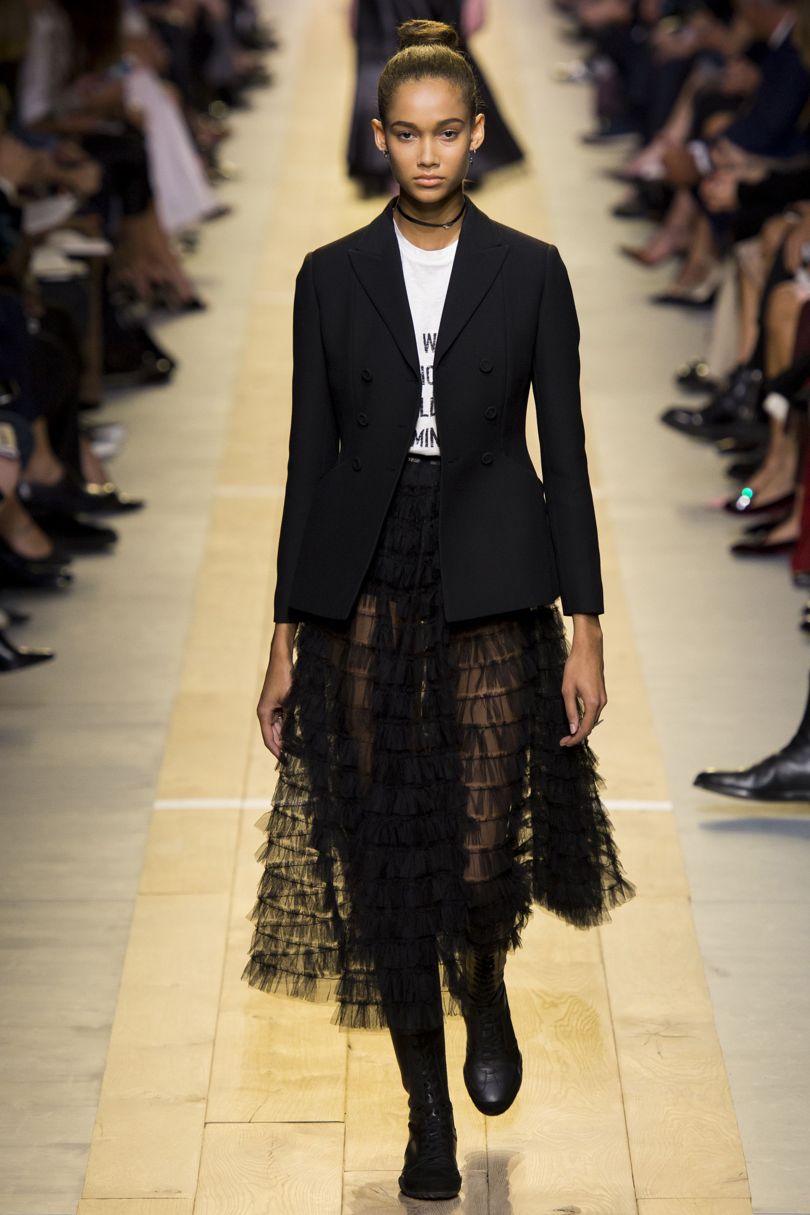 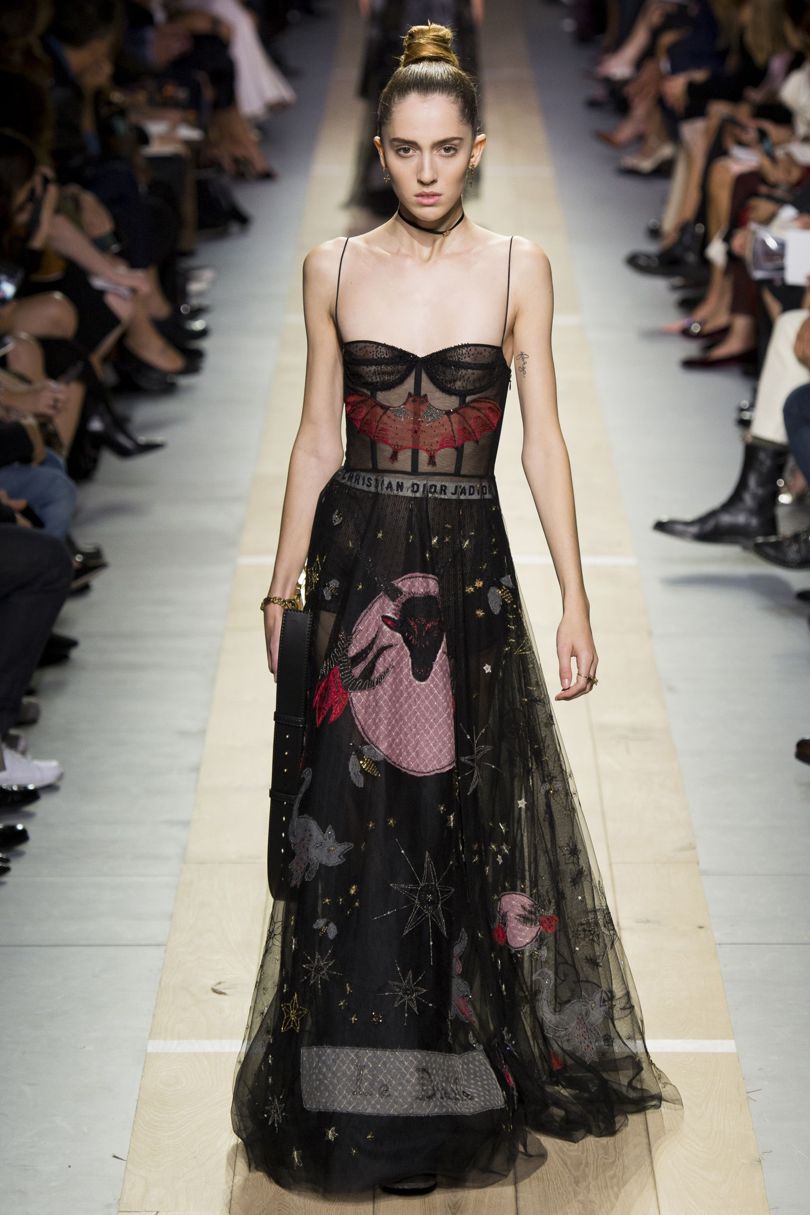 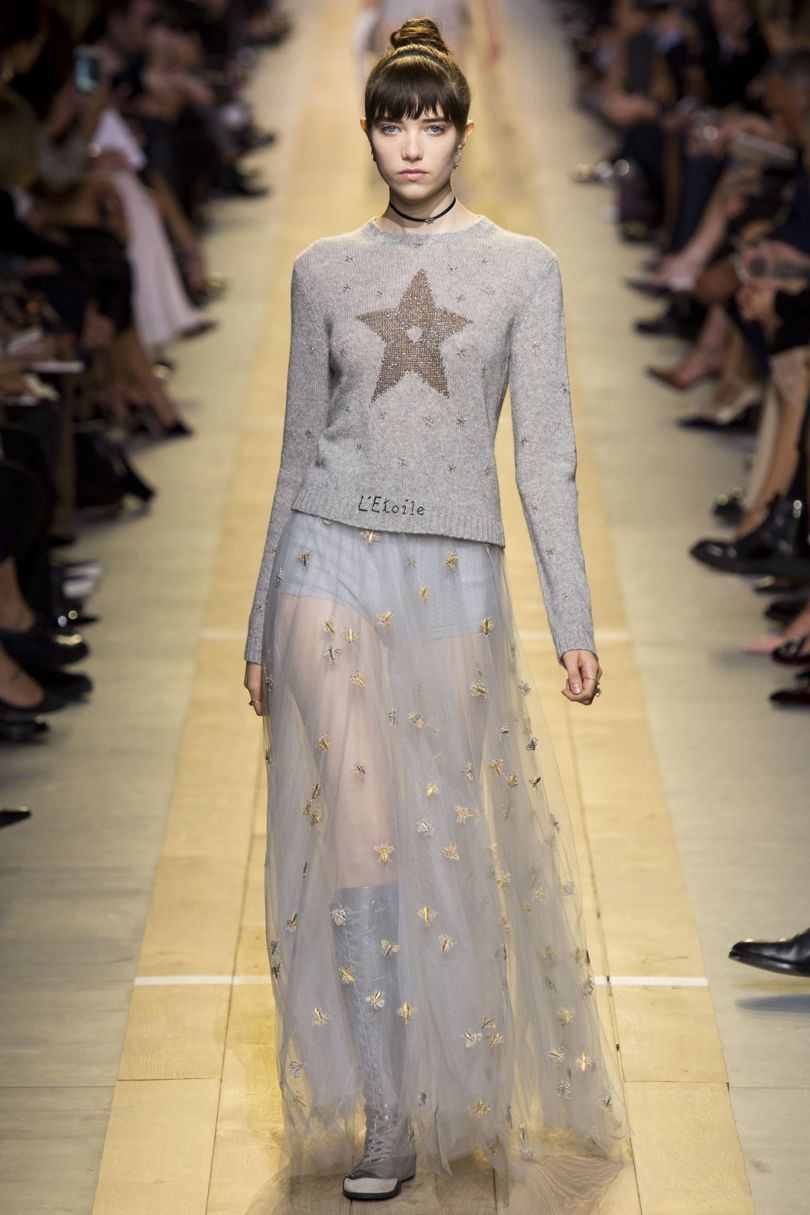 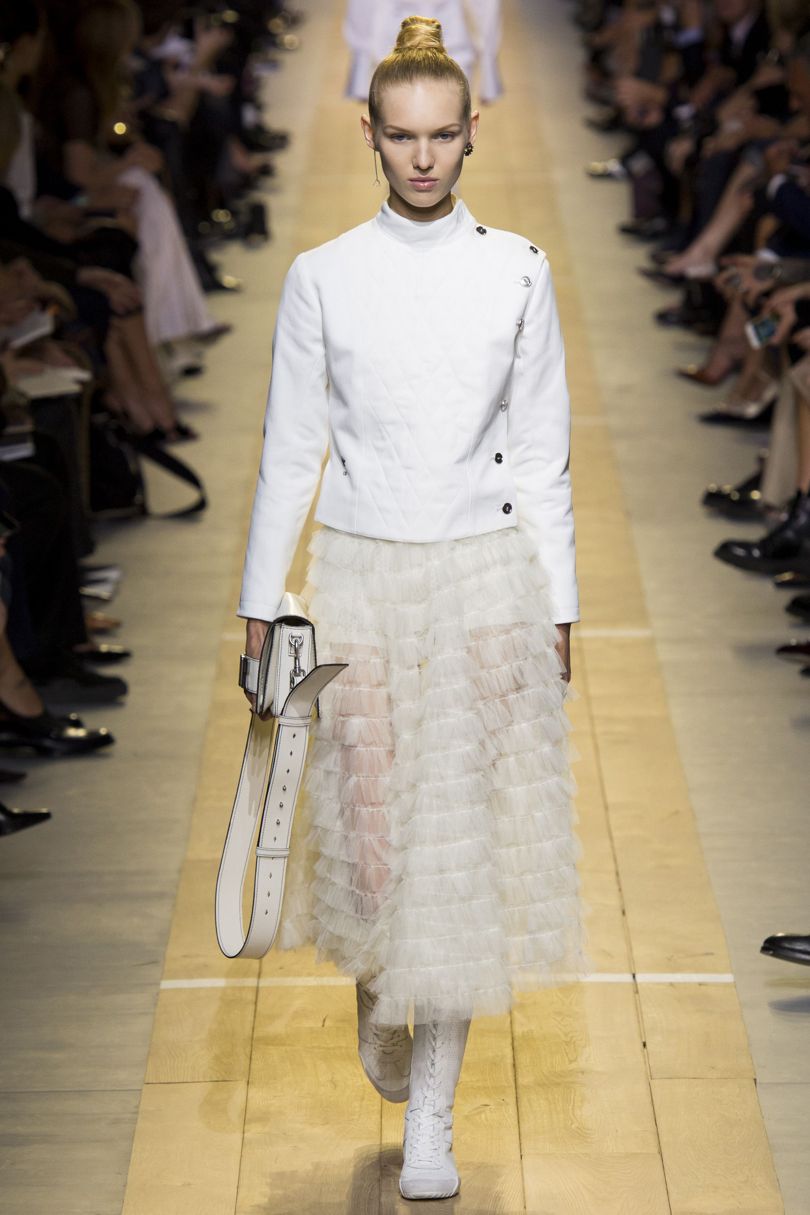 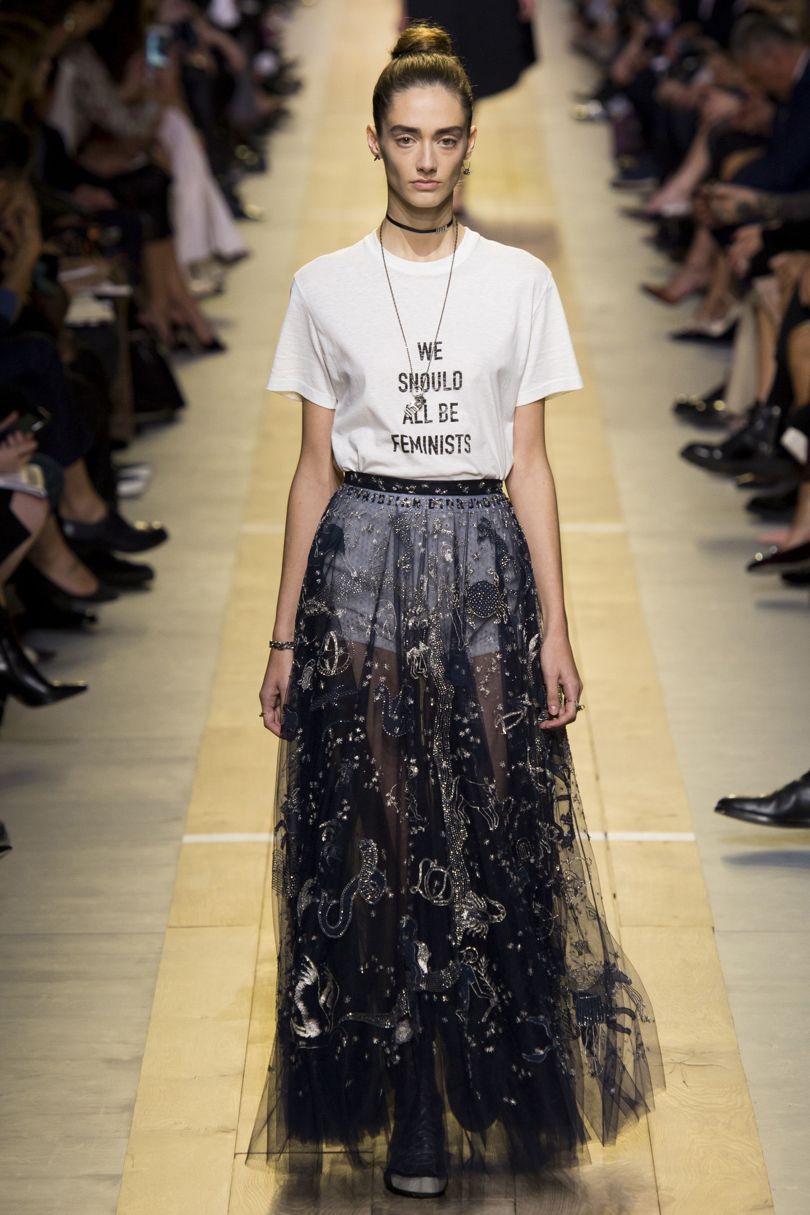 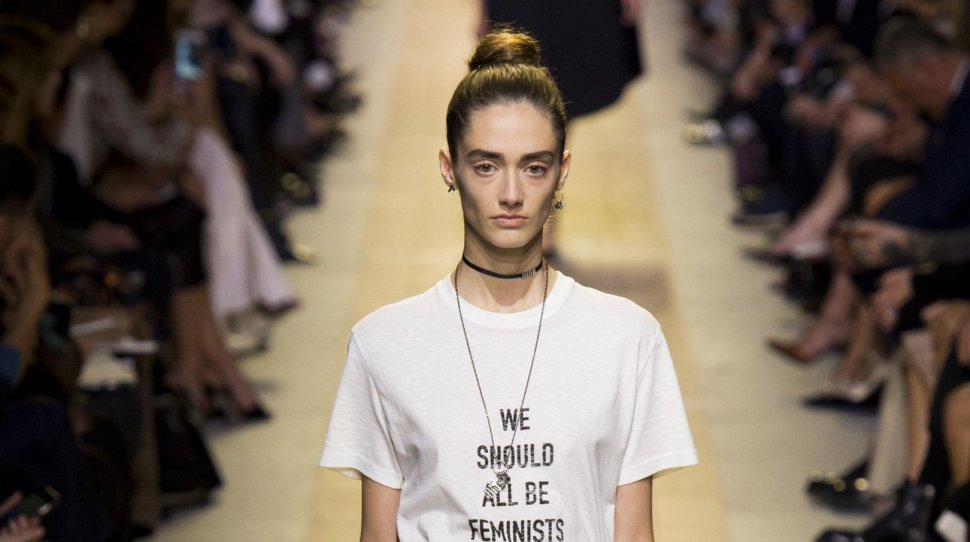 Rihanna was smiling, air-kissing, pouting and posing in her sexy white, bee-printed dress. But for once the pop superstar was not the centre of attention backstage at Christian Dior. Maria Grazia Chiuri had just given her first show for the house and all her friends from her previous role and long career at Valentino had come to support her.

They included, sitting front row like the Three Musketeers, Alber Elbaz, Giambattista Valli and Pierpaolo Piccioli, Maria Grazia's longterm fashion partner who is staying put at Valentino. Also among the many others guests was Pierre Cardin, 94,  the very first assistant designer that Christian Dior himself hired in 1946 - 60 years ago.

Then there was Kate Moss in crumpled denim and pin-heeled boots, representing those John Galliano years with its soaring glamour and abrupt ending.

The first thing Maria Grazia had decided on was to make her show - put together in just five weeks - universal, rather than controversial. That meant opening with a session inspired by fencing, to introduce constant jousting throughout the show between the male and the female. Hence masculine padded jackets with narrow cropped trousers, contrasting with a taut jacket and fluffy tulle skirt.

The fencing episode ended with a bold statement from the first woman ever to take the role of creative director at Dior. ''We should all be feminists," was the lettering on a T-shirt, worn with a navy tulle skirt embroidered with tarot cards - apparently an obsession for Christian Dior.

The new designer said that she wanted to use the long thread of past Dior creatives and work with their aesthetics.

"I think about the other designers that worked in the house of Dior because Christian himself was there only 10 years” she said, referring to the designer's unexpected death in 1957 at just 52.

"I am like a creator of the Dior brand so I decided to chose all the elements that these incredible designers did at Dior and I used it in a very free way," said Maria Grazia.

"On the other side, I would like to control this brand with my vision."

This comment was in response to the collection's mood board that showed some of the past designs, including Mr Dior's.

So what exactly was the full story, as the sporty fencing clothes with their sheer and opaque fabrics - occasionally with a symbolic Dior bee print - moved on to tailoring?

There was that famous Bar jacket - a trip up for most of the designers, since no woman today wants to look as though her hips are padded. Maria Grazia resolved the problem by re-cutting the jacket to look younger and sharper. It is tough to make much out of work clothes but she paired them with transparent tulle skirts - although they will surely be worn with tailored skirts, or trousers, in the real world.

Until we see how Maria Grazia handles Dior haute couture - whether she brings in the high romance and dense workmanship as seen at Valentino - it is difficult to judge this ready-to-wear show. Around 40 of the 64 outfits were evening clothes and quite familiar, except for exposed bra straps printed with "Christian Dior".

Once the new designs get going with the atelier workers - which she praised repeatedly - her collection will surely receive more embellishment than the moon and stars worked into a sweater.

But hats off to Maria Grazia - and the charming hats were by Dior's stalwart milliner Stephen Jones - for getting stuck into her role at Dior and thinking about a fresh start from a female designer.

"I think my point of view is completely different," she said. "In sport you don't distinguish gender because it's the same for men and women. I wanted to produce this element in fashion." 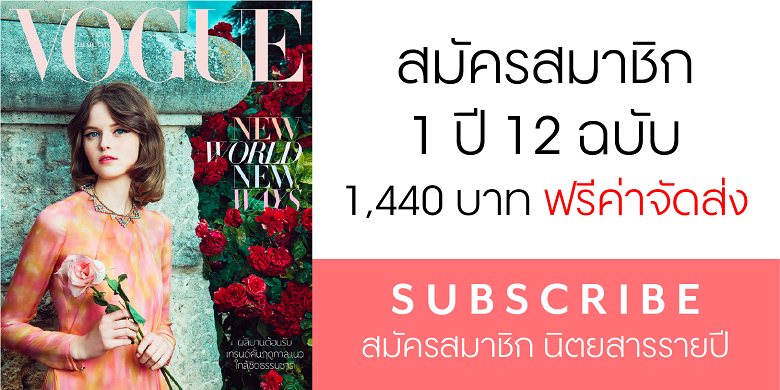 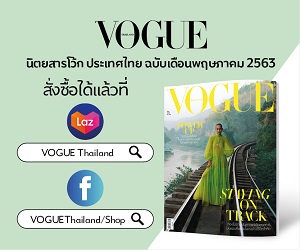